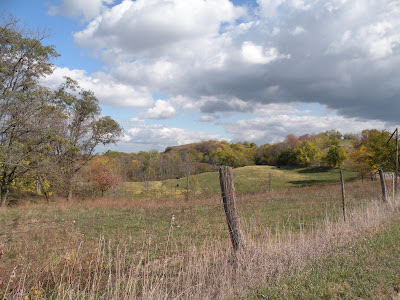 He was born the year the Titanic sank, November 20,1912. Women still wore long skirts, funny hats and didn’t yet have the right to vote. Assembly line production of automobiles had begun but many people in the countryside and small towns still traveled by horse and buggy. He told me that he remembered the first Model T rolling into town. One day when we took a country drive he showed me where the house had been that he lived in while a little boy and the trek he took to the schoolhouse that was on a great hill which to a child must have seemed like a mountain. He grew up, married his Flint Ridge sweetheart Ruby Gale Johnson, raised five children and grandfathered 14 grandchildren. I am honored to be one of them.

He worked for Central Ohio Coal and became a pastor. Grandma and Grandpa touched many lives. Their home was a nest of love, peace and harmony. They reached out not only to their own grandchildren but opened their hearts and arms to many of the children that they interacted with in their neighborhood and churches. They celebrated their 75th wedding anniversary together with their love only growing richer through it all. Grandpa had many interests in life, aviation, hunting, fishing hiking and writing to name just a few.

One of Grandpa’s interests was getting out in nature, where he felt close to God. He led his grandchildren through the wild black-raspberry patches outside his and Grandma’s Morgan County home. He took us through the woods on horses to follow old cow paths. We walked beside creeks and rambled down back roads, basking in the enchantment of God’s glories.

Grandpa liked to go walking. Sometimes we just walked together. Through the years this was our thing to do when we had time together. Sometimes my world and Grandpa’s world were miles apart but every time I got to be near him again I knew I was with a kindred soul. In his later life we took drives towards Blue Rock to an area he called his old stomping grounds. One time while visiting with Grandpa he said, “Trendle, you know how we like to explore nature and all God's beauty on earth? Some day I look forward to exploring outer space, traveling through whole universes and looking down on the earth from the stars."

I think I said something like, wow Grandpa really? I am not so sure, that sounds kind of scary to me! I am still not so excited about exploring outer space but I might not have been so sure about nature either if Grandpa had not lead the way. I might have grown up unresponsive to or even frightened of nature had it not been for his guidance. I think that perhaps now that Grandpa has gone on before once again, that just as he learned the ways of nature in these Ohio woodlands now he is learning the ways of the stars. Perhaps someday he will lead us through them like he lead us through the woods.  On April 2, 2012, the unseen hand he has been holding onto became visible and Ronald E. Wells, 99 earth years old, went home through what he called the gates of light.

Oft I love to wander, yonder

O’er the hills and smiling stream,

To the top of some high summit,
There to watch and pray and dream.

Just to think of God’s great wonders
That in nature there are seen,
And to be a silent partner
Of the One that’s there unseen.

Just to feel His loving presence,
As it rolls upon my soul,

Just to to know that Jesus loves me

Even though the tempest roll.

Just to know that as I journey
Down this toilsome way of life,
There is One who will not leave me
Till I pass though gates of light.

And methinks as there I ponder,
‘Mongst the flowers and alpine trees,
That I hear the angels whisper
Those sweet songs of Calvary.

And ‘tis then that I am lifted
To the realms of endless day,
And I hear my blessed Savoir
As He points me out the way.

“For I know how thou art tempted,
How the tempter dost thee try,
But my grace is all-sufficent,
Go, and I will be thy guide.”

So I’ve found the blessed secret
Of the power of Jesus’ name,
‘Tis to follow in His footsteps,
And to walk alone with Him. 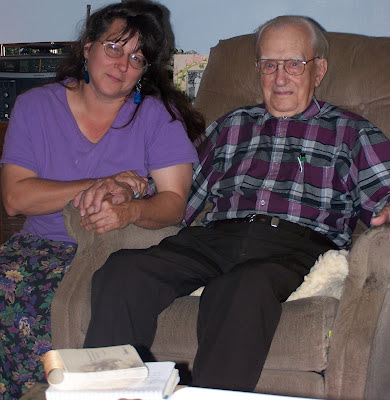 Grandpa and I, Grandma, the late Ruby Gale Wells, is peeking around Grandpa's shoulder in a photograph.

Posted by Trendle Ellwood at 12:21 PM