The sky was wild one evening as I drove home so I pulled over where there is a space near the railroad track and took some pictures. When I shared the photos on facebook it started an argument. Some of my friends think they are chemtrails (poisons intentionally sprayed into our enviroment) while others think they are contrails (water vapor trails from jet planes). Still others just thought the images were beautiful. Who really knows? Myself, I don't think those
rowdy race clouds are chem OR con trails. It truly appeared as if they
were all bursting out of that one middle
cloud and the streaks radiated around it. I think it was a cloud
mutating, trying something new, changing its DNA, spitting out cloud
rays. I think it was telling me to do so also. 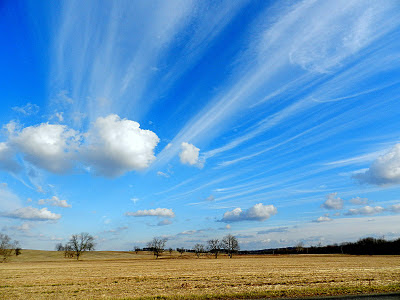 Posted by Trendle Ellwood at 9:26 PM