The Owl of Dusk

In February, if I listen, I can sometimes hear the mating call of what is most commonly known as the Eastern Screech Owl (Megascops asio) resounding through the vanishing light of dusk. It is a quivering, haunting trill that sounds distant yet I know the ventriloquist is only as far away as the blue spruce tree right outside our kitchen door. I don’t know how this owl got stuck with the common name, screech owl. His vocal contribution is anything but a screech. Perhaps a screech can be heard from him occasionally but that would be like naming us Cough because from time to time we cough.

Whoever slapped this name on him must have been jealous of the musical whisperings of this owl of many names. Known as Little Horned Owl, Shivering Owl, Mottled Owl and Cat Owl he is the most common of Ohio owls and can be found throughout the entire eastern half of the United States.

Small and adaptable, this owl puts up with humans, sharing our world, while hiding under the shadow of dusk and dawn.
I can understand why in days of old people were afraid of this secretive dweller, which moves in seemingly silent flight. Imagine what it was like hearing the otherworldly cries of the Screech Owl when you didn’t know what they were. If something from the spirit world were to develop a voice, this reverberating, seemingly multi-dimensional rendering of the Dusk Owl could be it.

At times the owl will give out it’s tones from the hollowed chambers of the old trees that it nestles in which greatly affects the ‘spookiness” of the sound. How eerie not to know the source and to hear THAT echoing coming out of the woods just as the light of day was leaving and the dark of night was moving in. This tiny creature (not over nine inches in length) has sent many a shiver down many a human spine.

I grew up hearing the old folklore that if you heard an owl in the middle of the day someone you knew was sure to pass away. One of my daughters when she was a little girl, despite all my explaining, would insist the owl we listened to as we walked home down our lane, was a ghost. Many of our ancestors would have agreed with her as they called this bird of the night such names as Ghost Owl, Spirit Owl and Whickering Owl.

A Whickering Owl was the last thing you wanted about your property, as everyone knew they were possessed by witches and were there to steal your baby’s soul. It seems this fear of the silent flyer of the night was the tradition in many cultures the world over. With their strange sounds, huge eyes and silent wings, the owl was surely set loose from the spirit world.

These days we know the Screech Owl as an innocent woodland creature. It was only our imaginations and run-away fears that were scary. We now realize that although the screech owl is a bird of prey it feeds not on human souls but on creatures such as insects, mice and moles. I am glad through understanding we no longer fear the owl but can instead appreciate its beauty and complexity.

One night when I had trouble sleeping because fears for my family and the world wouldn’t let me sleep I got up, put on my coat and walked outside where I looked over snow covered fields set aglow by the full March Moon. The night was so still and crisp and beautiful that I yearned to take off walking in the moonlight.

I stayed close to the hearth but my heart went soaring when I realized I was not the only creature awake. The tremulous trill of my little friend Dusk Owl was echoing through the valley and not only that but he was chorusing alongside answering echoes of a higher pitch. A warm feeling of well being enveloped me as I realized I was listening to the sweet fiddling melodies of a lover’s duet. I wished them the best and thanked them in my heart for the blessing of their unforgettable song. I prayed they had found a good old woodpecker’s nest box or a nice hollow tree to roost in and that there would always and forever be Dusk Owls to serenade moonlit skies.

Dear Lord. Help me to realize that sometimes I make up frightening stories in my head about things or situations because I don’t understand. Help me to remember that sometimes what I see as scary wouldn’t be if I had more knowledge. Help me remember that you see the whole picture and you understand everything and the whole world, even the little Dusk Owl, is in your hands. Amen

And by knowledge shall the chambers be filled with precious and pleasant riches. Proverbs 24:4 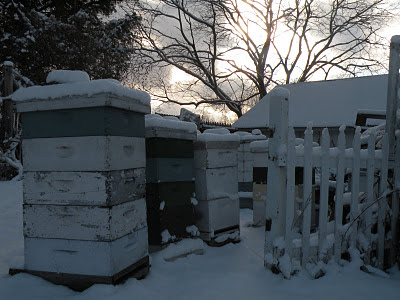 The Apiary in February
Posted by Trendle Ellwood at 3:55 PM