Bringing in the Greens 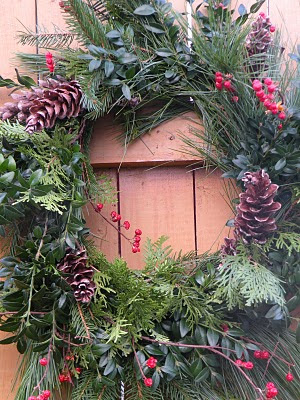 I feel so blessed this time of year that I get
to be in the element that I love while earning my Christmas money. Out
there with the frost and the frond, the dusk and the dawn don’t be surprised to
find me in a red pointed hat because I start to feel a bit like a Santa Claus. I
make blankets of green and red to soften the harshness of winter graves and
weave wreaths that usher in the Christmas Spirit on front doors. I become an elf of the woods, fetching the
symbol of hope that bringing in the red berries and greens evokes.
Posted by Trendle Ellwood at 6:35 PM 1 comment: Links to this post

The day is cold and most of the colorful leaves
are gone from the bushes and the trees. Behind our house the flowering
quince wears now its stark winter twigs. But what else! What is this? Four
perfect blossoms of springtime pink among the old and dying. I take nature personally so I feel so blessed
that God would speak in this way of hope to my autumn heart. 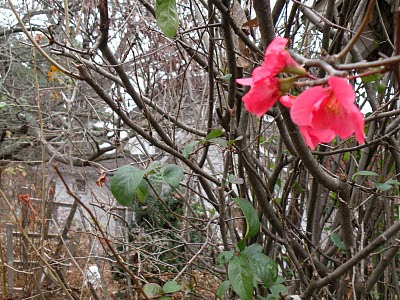 Posted by Trendle Ellwood at 9:48 AM No comments: Links to this post

Praise Be, a Persimmon Tree! Persimmons are beautiful. To me they look like tiny, plump pumpkins.

Odd that such a sweet fruit is mostly known for being tart. An unripe persimmon plucked from the tree is very astringent and one taste can cause your mouth to feel like it is growing hair. Honestly, the best persimmons are not picked from the tree at all but are the ones that have just fallen ripe to the ground, so plump and bursting full of moisture that they seem to mold into your hand like softened butter when you pick them up. Taste is the deciding factor; the unripe fruit will leave that chalky feel in your mouth. When ready the flavor of a persimmon has been compared to apricot, plum or pumpkin, I think it tastes somewhat like orange crème soda pop.

Blend soda in persimmon pulp. Cream sugar and butter. Add raisins and nuts to flour and spices. Beat egg and salt, then add to pulp and add to sugar mixture. Add raisin and nut mixture last. Drop heaping teaspoonfuls onto greased cookie sheets Back at 350 degrees for 10 minutes. After the cookies have cooled, place in a closed container to keep them fresh. Do not overbake. 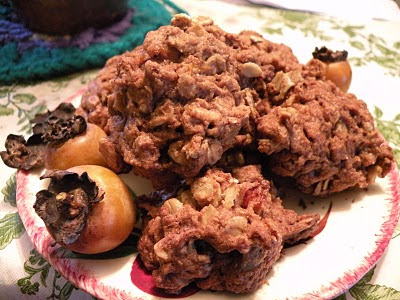 Posted by Trendle Ellwood at 5:56 PM No comments: Links to this post 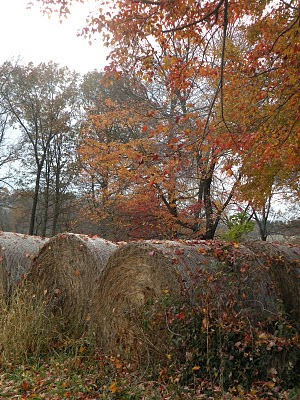 Perhaps we wouldn’t appreciate any of the seasons if they didn’t always go by.
Would we rejoice in the vividness of the autumn leaves
if they glowed with such color in the spring,
summer and winter as well as in the fall?

Most likely we would just take them all for granted.
I thought it was especially dark and grey today,
the landscape from my window void of all color when My Lord whispered,
“It is not over”, and He lead me into the woods where,
“Look Here,” and my eyes rejoiced in red maple leaves gone
from the trees yes, but mingling now with the contrasting green
of trailing euonymus on the woodlot floor. 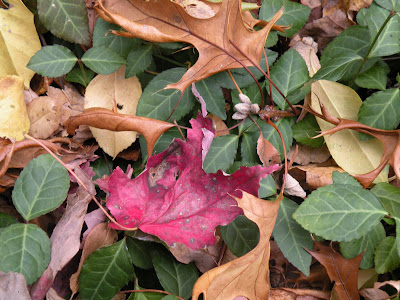 Walking across this colorful carpet I came to a place
where a large fallen tree lay on its side and
I sat for a time there on the log just watching the sun pretend
to shine every now and then from behind the clouds. 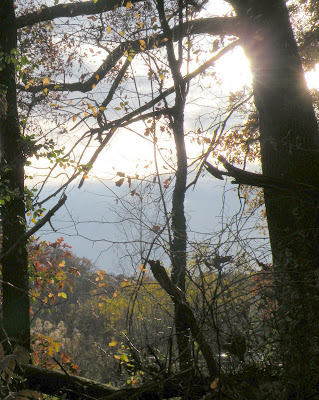 Finally the sun shone for sure and I felt real warm and cozy sitting
in a shaft of its light. I yawned and pursued the thought of
taking a nap as I had become mesmerized by the sound of the gentle breeze
and my eyelids grew heavy. It reminded me of the tale of Rip Van Winkle.
He took a snooze in the woods and didn’t wake up until twenty years later.
I wondered what that would be like. I thought since I had so much
in common with Rip, preferring to nap in the woods over doing the
dishes that waited for me in the house, maybe if I tried hard enough
I could sleep until those dishes magically disappeared.

Suddenly, I was shaken out of my silly, state of slumber to realize
I was being severely scolded. I was being told in no uncertain
terms that I had my own bed and this spot was not it. I had been
dallying around and taking up space for much too long and it was
past time for me to move on. I felt like a homeless person being
scooted off the park bench they had been sleeping on.

As I lumbered up from my seating position I apologized to my contender.
He dashed back and forth and advised me that this was his tree and I
was sitting between him and his stash. I fumbled for my hat and camera
and told him, “O.K. I am leaving!” I bowed to him as I retreated not
daring to turn my back to him for fear he was going to plunge from
the tree and tackle me from overhead.
Squirrels, they are such feisty creatures. 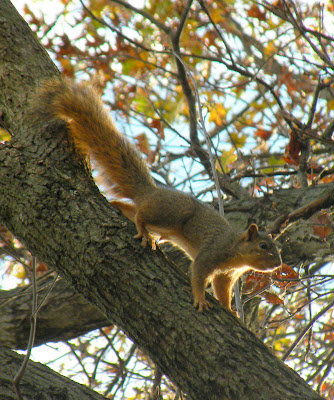 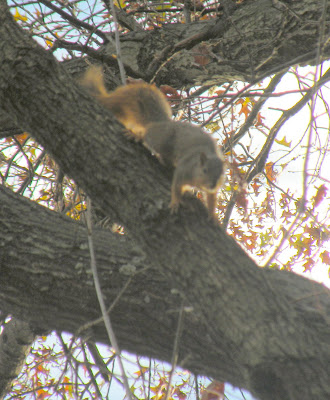 Posted by Trendle Ellwood at 1:16 PM No comments: Links to this post

The Last of Autumn 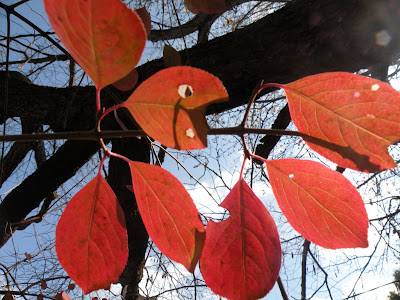 Today the Black Haw tree that came up wild behind our house
has seven crimson leaves still left hanging.
I feel that it would be a sin to let them fall unnoticed.
It seems so sacred the way they submit to the call of God and gravity.
Still full of vivid color they let go of their clasp to the mother
and dally down through the air to lie on the ground,
a love sacrifice to The Creator.
Posted by Trendle Ellwood at 11:48 PM No comments: Links to this post 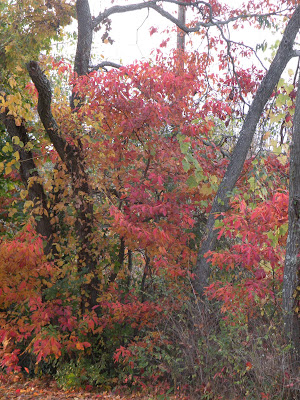 I always feel a nip of sorrow with the disappearance of the autumn leaves and the first frosts of November, October was so beautiful, all that color. Now it is gone and we are left with dark shadows and cold. We humans are so resistant to change. When our hair begins to grey we want to hold onto the color and buy some at the store. We plaster crème on our age spots and shade our faces from the sun. Yet, what does nature care? Nature doesn’t try to hold the seasons back, each one is necessary and contains it’s own uniqueness. The leaves don’t try to dye themselves orange again. Instead they don drab brown and give themselves willingly back to the earth. It is so hard for us humans to do the same. 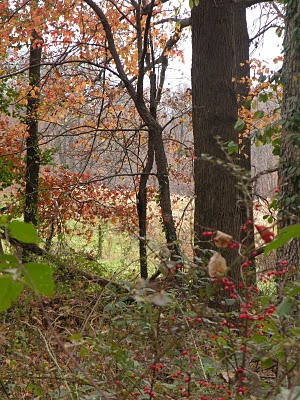 I loved this article from Does Publishing a Book Make You a Writer? By Susan Henderson, author of Up from the Blue.

"A writer is someone whose senses are wide awake—who notices the person sitting alone at a party, the sound of an acorn falling on the roof of a car, the unusual item a stranger sticks in his pocket. A writer can imagine something in such detail that it comes to life, can see a scene from all points of view, can put the words in such an order that they sound like music. The qualities that make a person a writer are not defined by outside success but are embedded in the soul and carried out by the pen."
Read whole article HERE.
Posted by Trendle Ellwood at 10:56 AM 1 comment: Links to this post