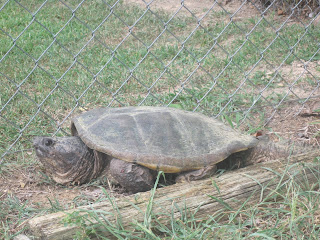 I live on the outskirts of the city. By no means would you say we normally see wildlife in our neighborhood. Occasionally there will be a deer sighting in the early fall on a rainy day. The days of late have been so extremely hot, man or animal welcomes a refreshing summer storm. This morning we are enjoying lower temperatures but the humidity is so oppressive as the cloud cover seems to be settling down over our area and we wait on the relief that may come later as the clouds can no longer contain their heavy load.

I had just finished my daily walk to DVD and was pouring myself a cup of coffee when  I saw it. At first I decided my neighbors had purchased their children a most unusual pet. Lumbering slowly to the back of the back fence that encloses our neighborhood, was a very large turtle. Not the customary pet sized version! As I stirred my coffee and continued to gaze out the window, I suddenly realized it was not in my neighbor's yard, but my own. How in heaven's name did it get there? I am certain there may be a pond on the other side of the fence since we back up to some of the only real farmland this close to the city. However, this unexpected visitor had come from the opposite direction. I later learned my neighbors had seen it in their front yard  a bit earlier.

Grabbing my camera, I ran out to get some shots, knowing no one would believe this story without proof. By the time I arrived on the scene, he or she (how would I know?) had made it to the fence and found itself trapped. After realizing I would not be able to get this large creature in my car, I called animal control. The young man who answered my call did not spare me his sarcastic reply of  "Ma'am we don't come out for TURTLES. Would you like to speak to someone at Wildlife?"  Wildlife? We actually have a division for that here in our area? For those of you in more rural settings you may find my response quite foolish... not as foolish  as my attempt to give this turtle water from a dish.

After taking a shower and feeling quite guilty that it remained trapped in the leaves and brush without any water, I set out a tray of water. After it climbed over the dish several times spilling all the water, I decided my efforts were futile. My neighbor and I got enough video and pics to make a wildlife scrapbook for the county fair coming soon. After all our attention and that of the neighbor's dog and cat, he or she decided to make a trek in another direction, coming to rest in a much cooler place under my deck. Can't say that I blame the poor creature. Out of harm's way and the lens of three cameras, it seems to be sleeping or resting quietly.

Perhaps much ado about nothing to those who are used to an occasional wildlife specimen in their vicinity but for those of us city gals it has been an exciting moment in an ordinary day. So many thoughts running through my mind as I think about this unusual guest. How often we feel trapped in our ordinary days and climb fences or walls in our minds. We search for a place of solitude and peace. If we, like this turtle would just move another direction, perhaps we'd find ourselves headed for just the right place in the shade of God's hand.

I dont have any idea how we will get my new pet to a place where he or she can get the water it needs but I trust the Creator will make a way for it to happen. I am amazed at how he makes a way for all those he loves, His creatures great and small. Will keep you posted on this story and how it unfolds.
Posted by Robin at 12:09 PM