Notice the dragonfly I managed to catch in motion in the upper right hand corner of the picture below. 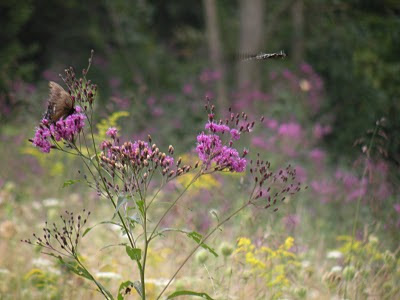 One day I walked out my kitchen door to discover the most curious display. The sky in our back yard was swarming, not with honeybees as usual, but this time with Dragonflies. There must have been thousands of them. They were flying so fast that I couldn’t get a good look at them to find out what kind they were but I could see an emerald green color about them as they whirled by. I guess these remarkable creatures can fling themselves through the air at speeds of up to 30 miles per hour. Flinging themselves is what they were doing none of this flying about gracefully, like the butterfly, for them. I stood there a long time gazing up at the sky watching them and wondering if they were teenagers because they seemed to be displaying the same kind of frantic energy that a teenager can sometimes exhibit.

I was also hoping that someone in my family (even my teenager) would get home in time to witness the grand phenomena with me. I tried to catch it on camera but how do you catch a three-inch helicopter as it zooms by, darting back and forth? Not only were miniature helicopters patrolling the whole span of our back yard but barn swallows were bobbing and waving with the current of the wind like kites, in a dance with the helicopters. Looking in awe up at the sky I was amazed to see that the birds looped around and around our yard making even wider circles then the insects. I walked out of the gardens and crossed over the road into the field to get a wider perspective. The whole effect was like the circling ripple that a pebble dropped in water makes. The swallows pointed wings and dark, forked tails silhouetted against the light, blue sky. I wondered if the birds were eating the dragonflies and if the dragonflies were eating something too or just trying to get away from the birds? Were the dragonflies feasting on our honeybees? 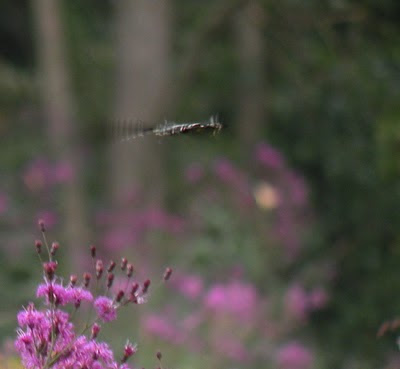 I came in the house to do some research and found out that dragonflies love mosquitoes and we have been bothered by those pesky insects lately. I couldn’t find any information about dragonflies or swallows eating honeybees so hopefully bees are too much for them. According to my bird field-guide from the Ohio Department of Natural Resources, swallows are indeed aerial insectivores and as such forage for flying insects, mentioned were mosquitoes, moths, and dragonflies.
So, our yard ended up being a food forage-for-all as the dragonflies and swallows turned it into a space show. It sure was a grand show to see. Man’s way would have been to spray the mosquito. Nature’s way was to supply food. I like nature’s way better, no toxic poisons, just the circle of life continuing. I was happy remembering that space show as I relaxed outside this evening with nary a mosquito to bother me.

After this display I began to look and search as I was traveling about and I saw fields full of dragonflies on the way up towards Columbus alongside the highways. Several times as driving about I noticed some people pointing and looking up into the sky. I would look in the direction they were pointing to but couldn't see what they were seeing. As the car I was riding in drove on I smiled inside and thought, maybe they are seeing a swarm of dragonflies too!

It is so much fun and you don't feel so all alone when somebody else discovers the same magic that you did. I really enjoyed reading Jim McCormack's take on what he titled the dragonfly invasion on his blog blog Ohio Bird's and Biodiversity.

As one who is interested in how the Native American Indians who lived on this land before us read into things I was intrigued when I learned that they regarded the dragonfly as representing transformation as did many cultures of old.

I truly think the dragonfly has something to say to me at this time as articles and snippets about them just keep dropping onto my lap ever since the day they visited my yard. I read this from Alice Kitselman.

"Dragonfly teaches us to apply the art of illusion to our own questions and situations - to remember things are never completely as they seem. It teaches us to look at the illusionary facade we accept as reality. The shifting movement, energy, form, and color of its iridescent wings open vague memories - reminding us of alternative perspectives. Dragonfly is the essence of change, the messages of enlightenment and wisdom. It also brings communication from the elemental world, nature spirits. Dragonfly asks us to look at the habits we need to change, guides us through the mists of illusion - is the gatekeeper to the pathway of transformation.

Some legends say that dragonfly was once dragon, that coyote tricked it into changing form. In accepting a challenge to prove its magical prowess and powers, they were lost and dragonfly was trapped within its new shape. Have you been trying to prove your power to yourself or someone else? Have you become trapped in someone else's illusion of happiness? Dragonfly medicine brings you to the gate of transformation, to a place within where magic is still alive - within, where all transformations take shape." Alice Kitselman,this was at Dragonfly Dream

It just gets better and better! This came in a letter from a friend, just by chance?

Meaning of the Dragonfly

"In many cultures, the dragonfly is regarded as a symbol of light, adaptability, grace and transformation. It is no wonder that the dragonfly holds out its wings so straight and proud. Not only is it one of the most brilliant and beautiful insects, but it is also rich with meaning too!

This ability to reflect and refract light is responsible for the dragonfly's status as a "light-bearer," as well as a symbol of all the power and presence that is associated with light and love. Dragonflies remind us that we, too, are "light-bearers" and silently encourage us to let our own light shine forth. In addition, dragonflies exhibit the many colors of life. With maturity, the dragonfly's own true colors come forth, as it learns to bend, shift and adapt light in a variety of ways. These bright colors take time to develop, but are always worth the wait because they ultimately reveal the insect's deepest inner beauty. The dragonfly demonstrates the utmost adaptability and grace as well.

No bird or other insect has the flight maneuverability of the dragonfly, which can quickly change directions when necessary. They are experts at going where they need to be and doing what they need to do. Traditionally, the dragonfly is the symbol of transformation and life's ever-constant process of change. Although the dragonfly spends the majority of its life on the bottom of a pond as a larva, it always rises above that. The dragonfly works its way through the weight of water and into the sunlight, gathering and garnering what it needs to change and unfold. When it is ready, it sheds its protective casing and flies away from the pond, to ultimately unite with other dragonflies, which have also completed their transformation and are even more vibrant and alive." The Kelly Foundation

When I picked up the Sojourner's Magazine to read the latest issue was I surprised when I spyed Cathleen Falsani's article in GodStuff ABOUT dragonflies?

"Dragonflies tend to turn up at times in my life that I would describe as liminal-threshold moments when you stand in the doorway between what your life was before and what it will be." Cathleen Falsani
Posted by Trendle Ellwood at 12:31 PM