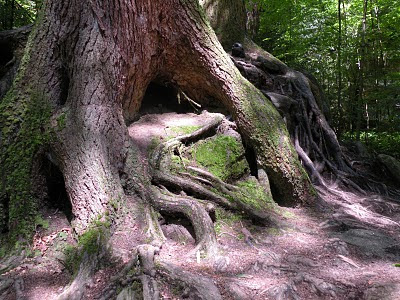 One day as I was lying on the couch I had the vision that I was a root. I could feel my tap root go from the top of my head through my body and down my legs and out the soles of my feet. My arms were side roots which could reach out and gather nourishment. I could feel the flow from out of the top of my head and out on soles of my feet. Stuff was flowing out and stuff was flowing in.

I thought, I don't want to be the dark ole root! I want to be the fresh green shoot that rises up to meet the sun and grows flowers. The instant I thought that I also saw a sickle come and chop down the fresh green growth that I had imagined. And faster then fast, the green sprouted up and grew again and got chopped down again. Chop, Chop, Chop I watched the sickle go. Always cutting down the sprouts.

I could see the root was unaffected by this harvesting and just went on living and sending up shoots. And I heard a voice say, " Be the root!" It wasn't three hours later that hubby and I were sitting at the table with a friend. Hubby was processing his horseradish, and our friend was sad because hers got tilled over. Hubby was fast to tell her not to worry. “You can cut that root and dig up that root, and it will sprout again!” he told her. “Don't worry, you will have horseradish.” Wow! I thought! Be like the root!

It wasn't but a few more hours later that we were walking and hubby pointed out a small maple tree that he had chopped down numerous times, only to have it persistently send up new stump sprouts. Alright God I whispered to the wind, I will be like the root, ever quietly alive, sustaining and nourishing the new life.

Later I was very intrigued when I was lead to this scripture from the bible.

Cursed is the man who trusts in man and makes flesh his arm, whose heart turns away from the Lord. Jeremiah 17;5

Blessed is the man who trusts in the Lord, whose trust is the Lord. He is like a tree planted by water, that sends out its roots by the stream. Jeremiah 17;7-8
Posted by Trendle Ellwood at 10:46 PM