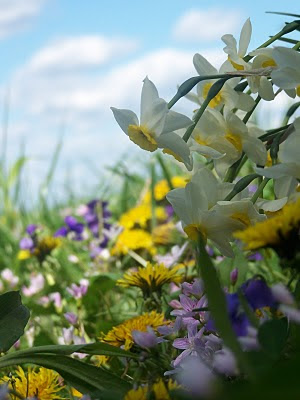 He came a few weeks ago, back from wherever he escapes to in the winter. First he checked out the new garden walk by the kitchen garden. He hopped about and scanned every rock and plant, learning new territory. He seemed to be pleased because he brought his bride and she followed the paths with him. Then he started singing from way up high in the tulip tree, the jointed calls that only he knows and a mixed melody of mimics, other bird’s songs plus some that are all his own.

I am not sure if he is named catbird because of the meow like sound that he can make or because he follows the cats around announcing their presence to all the other birds. He is quite an energetic fellow who is always on top of things. The rather ugly name of Catbird I don’t think does justice to such a beautiful and talented bird. He wears a coat of slate grey and a little black cap atop his head and looks quite refined I think. He is a close relative of the mockingbird and the thrashers. I like to call him, my Gray Thrasher. I can hear his songs from the kitchen window and I could never get bored with his medley of tunes.

But alas the other day I found a mess of grey feathers on the ground by the herb bed and a blob of stuff on the porch that looked like innards. Did the cats kill the catbird!? How could they ruin the brave, strong, intelligent catbird!? My heart was shattered. The wind blew strong and hard all day long and even though I strained to catch a note from the Catbird I couldn’t hear any birds at all above the moaning of the wind.

I knew I had too many cats! I didn’t ask for all of them. They get dropped off and I cannot let them starve. I get them fixed because there are already too many cats in the world but the Vet. says she cannot take the bird hunter out of them. Shame. When it happens I guess we will know that we are in heaven, but for now. Oh if they killed the Catbird this is too hard! My heart moaned with the wind all day and my ears strained for any sound of him. None was to be heard. But alas there remains a happy ending! He sings his happy notes even now as I write these words and he seems to be saying, “ All is well, all is well! Look and see, hear and see I lived to sing the tale of when the cat got my tail. Look at me, can’t you see, all is well, all is well! Miracles! Miracles! Just believe! Just believe!
Posted by Trendle Ellwood at 10:10 PM